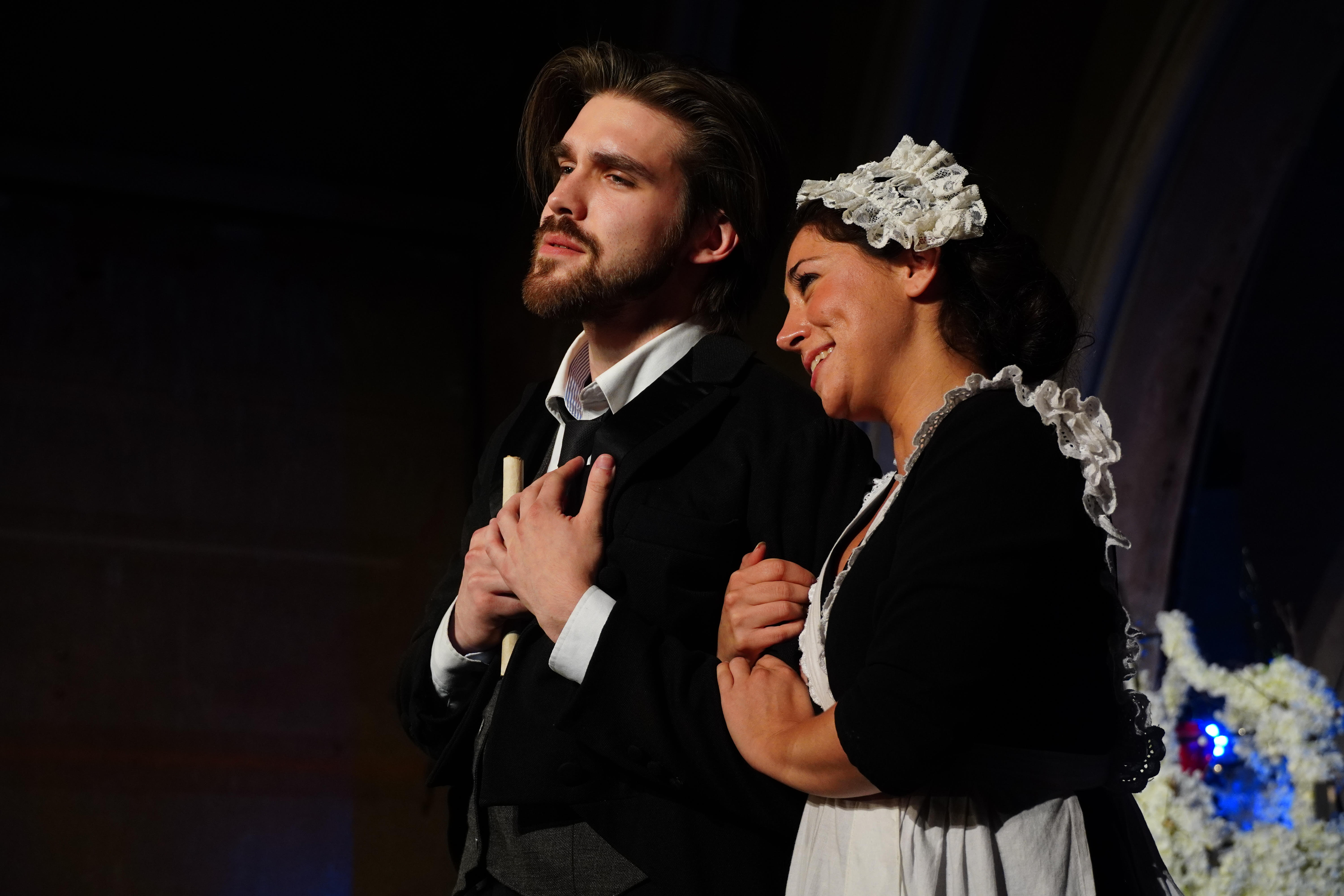 The goddesses of Fortune and Virtue dispute which of them has the most power over humankind. They are interrupted by the god of Love, who claims greater power than either: “I tell the virtues what to do, I govern the fortunes of men.” When they have heard his story, he says, they will admit his superior powers.

Ottone, Poppea’s lover, stands at dawn outside the palace of his beloved, venting his amorous passion; but seeing Nerone’s guards asleep in the street while Nerone himself is happily inside Poppea’s house, Ottone laments his misfortunes.

Nerone’s soldiers awake; while complaining about the discomforts of the previous night, they curse the love of Poppea and Nerone, and gossip about the court.

Nerone and Poppea, fondly embracing, bid farewell to one another with tender caresses.

Poppea talks with Arnalta, her old confidante, of her ambitions; Arnalta warns her to put small trust in great men, or Fortuna.

The empress Ottavia tells her sorrows to her attendant, Nutrice, and condemns the faults of her husband Nerone. Nutrice suggests that she take new lovers; but Ottavia perseveres in her afflictions.

Seneca consoles Ottavia and exhorts her to be steadfast. Ottavia’s page, Valletto, makes fun of Seneca. Ottavia leaves to pray in the temple.

Seneca speculates on the transitory grandeur of this world.

Nerone declares to Seneca that he will follow his own wishes in marrying Poppea. Appealing to moral and political reason, Seneca tries to dissuade him, but Nerone, in a fit of rage, dismisses him.

Scene 9 Poppea and Nerone discourse on their happiness. Nerone promises to make her empress. Seneca is slandered by Poppea, and Nerone angrily decrees his death.

Ottone accuses Poppea of faithlessness; she disdains him scornfully, telling him that she is Nerone’s.

Ottone, in despair, rages against Poppea.

Rejected by Poppea, Ottone returns to his former love, Drusilla, and swears fidelity to her. Drusilla rejoices in her regained love: and so ends the first act.

Mercury announces to Seneca that he will die on that day; undaunted by the horrors of death, the latter gives thanks to Heaven.

Seneca receives the death sentence which Nerone has decreed. Steadfast, Seneca prepares to leave this world.

Seneca consoles the members of his household who try to dissuade him from death, and orders them to prepare the bath in which he will die.

The page Valletto and Damigella, a maid of the empress, amorously jest together.

Nerone, having heard of Seneca’s death, together with a friend Lucano, sings amorously, delirous with Poppea’s love.

The empress Ottavia commands Ottone to kill Poppea, under threat of her imperial rage, and to disguise himself as a woman for his own safety. Ottone, deeply grieved, leaves in confusion.

Drusilla rejoices, consoled by Ottone’s vows, and Valletto banters with Nutrice about her old age. Ottone reveals to Drusilla that under Ottavia’s order, he must kill Poppea, and asks her for her garments so that he may disguise himself. Drusilla agrees to give not only her clothes, but her help and secrecy as well.

Poppea, rejoicing at the death of Seneca, prays to Amore that her fortunes may prosper. She decides to rest in the garden and is lulled by Arnalta’s lullaby.

Amore hides near Poppea while she is asleep, to prevent her death.

Ottone, disguised as Drusilla, enters the garden in order to kill her, but Amore prevents him. Poppea awakens and Ottone (who is thought to be Drusilla) escapes. Amore declares that having saved Poppea he will crown her empress that very day; and so ends the second act.

Drusilla rejoices, hoping soon to hear the news of the death of her rival Poppea.

Arnalta comes to seize Drusilla, who bemoans her fate.

Nerone questions Drusilla about the attempted murder. Though innocent, in order to save Ottone, she confesses to having tried to kill Poppea, and is therefore condemned to death.

Ottone, seeing that the innocent Drusilla has been sentenced, reveals himself as guilty of the crime and confesses that he acted under Ottavia’s orders; whereupon Nerone spares his life, condemning him and Drusilla to exile. Nerone decrees the repudiation of Ottavia and orders that she be exiled.

Nerone swears to Poppea that she will be his bride that very day.

Repudiated by Nerone, Ottavia leaves alone, weeping as she abandons her country and her family.

Arnalta enjoys her new-found status, and exults in her contentment.

Nerone solemnly attends the coronation of Poppea. Amore crowns Poppea as goddess of beauty on earth: and so ends the opera.